Published on March 27, 2017 by myhousetorent

Most believe that Crete is an island. But it is a series of high mountains scattered in the sea between the Aegean and the Libyan Sea.
Lays in the southern part of Europe,  as a link between three continents Asia, Africa and Europe
260 kilometers from one end to the other, with the coasts reaching up to 1000 kilometers.

Crete could not be a unique Mediterranean without the picturesque villages and their authentic character, which often recede in the mountains, covered by snow from December to May and  small valleys between with olive and orange trees. The visitor has many nice discoveries every time he leaves the main roads  these villages.

Beautiful hidden beaches, high mountains, traditional way of life, Cretan hospitality.
There is no place that has not been inhabited since the Minoan era. Homer mentions in the Iliad 100 cities in Crete.
Archaeological interests, picturesque villages, deep gorges, mixing with good wine, large varieties of cheeses, local dishes in each tavern, along with dancing and religious summer festivities.

Renting a house directly from owners in Crete for summer holidays, offers the best way for a quiet vacation, time to spend as you want with peace, breakfast and lunch any time you want, with the locals around or alone and most importantly, spending less than hotels .

Our houses and rental studios are located away from huge hotels and mass tourism, in coastal villages and are considered the most beautiful places to stay in Crete.

Read tips and tricks once you are in Crete

A visit to Chania old town 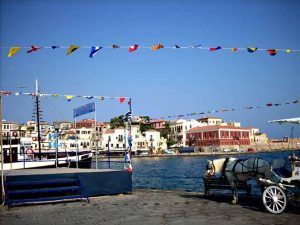 Follow our itinerary of self walking tour in Chania old town.

Walk  in the narrow streets of the city, early in the morning or late at night, inside the labyrinth of old Venetian palaces, Turkish wooden facades and twisting Greek concrete houses… … You will hear voices coming from the stones, whispering stories of the past in Arabic, Latin, Turkish,  Hebrew or… Greek.

The stones are murmuring secrets of past lives : the happiness, sorrows, hopes and fears of so many generations which were born, grew up, fell  in love and died within.
From the top of the Venetian fortifications girdling the old town, one can hear these conversations pursued above the city’s roofs.

The fortifications surround the remaining two minarets, the Egyptian lighthouse and the mosque of Giali Tzamisi at the port’s entry, the synagogue of Chania, the Catholic church and the Orthodox cathedral’s bell towers.   Centuries, religions, people come and go, but the prisoners of Chania’s charm keep coming back every year and at every opportunity.